Black Swan is all the hype right now and I will admit to jumping onto that bandwagon with the agility of an African chimp, and snagging a screening pass from a friend. 41/2 hours later - coz that is how long my experience with the screening lasted - I walked out of the theater hungry and pissed (not the alcohol kind).

Basically Black Swan is a movie about a woman trapped in her little girl mind, her ballet slippers, bulimia and acute paranoid schizophrenia. Interesting concept when you think about it, right? And that is exactly my problem with this film, I was THINKING for 108 minutes. Which means, the film never drew me out of myself and into the story. I spent the whole time spectating, wondering, deducing but never experiencing.

Our heroine, Natalie Portman is flawless with her ballet pointes. But seriously, even Forrest Gump showed more emotional range and he was an idiot. Aronofsky presents us with a ballerina suffering from acute schizophrenia brought on by her unattainable desire to be perfect. And what does our character learn after a harrowing journey that fouette’s her into various forms of self-mutilation and severe paranoid schizophrenia? You mean, besides making a strong case for more mental health programs? Nina learns that she IS perfect? Character arc anyone?

There was a moment that would have made this movie great! That moment was the murder in the dressing room that inspired Nina's powerful performance as the Black Swan. If Aronofsky had allowed that moment to be real it would have been as powerful as the spinning top in Inception. Can you imagine, such beauty and perfection from ugliness? But alas, Aronofsky took that moment from us and dropped it into Nina's psychosis.

Was Black Swan a bad movie? No way! Darren Aronofsky is a genius and I’ll fight anyone who thinks otherwise.

Is it Oscar worthy? Go watch Inarritu’s Biutiful then ask yourself that question.
Posted by Kenyan Girl at 11:39 AM No comments: Links to this post

Los Angeles IS the city of angels.

I am tired of out-of-towners who come to LA for a visit and disrespect Angelenos.

First, fake people are EVERYWHERE in this world. At least here you can tell them apart by their boobs and lips, so count that as a blessing.

And second, if Angelenos having either a headshot, director's reel, spec script or capezio dance shoes on the ready annoys you, stop and think for a moment about where you are. THIS IS HOLLYWOOD - ENTERTAINMENT CAPITAL OF THE WORLD! Artists have to hustle for every gig or go hungry. And the tools of our trade are---please see above. If we were in Pittsburgh (50 years ago) everyone would have a plaid shirt and a hard hat. If we were in Miami everyone would have an STD and a six pack....hmmm or is that San Fernando Valley?

And finally, where can one find a gathering of people resilient enough to continue pursuing their dreams after multiple rejections? Los Angeles, California. This is the City of Angels not because some of the folks here are cute, but because Angelenos continue to dream and believe despite insurmountable odds.
Posted by Kenyan Girl at 2:19 PM No comments: Links to this post

Email ThisBlogThis!Share to TwitterShare to FacebookShare to Pinterest
Labels: On The Verge of WTF

TV vs INTERNET: Which is more dangerous?

For those of you who believe that the internet, unlike the TV, is less dangerous, corrupt and the source of more accurate information, think about this - Network and Media moguls, though cunning are seldom stupid and rarely insane. But any mentally disturbed, paranoid-schizophrenic with an internet hook up can log onto a computer, spray the web with their clozapine and risperdal laced rants and call it truth.

Which do you think is a more dangerous source? The quiet voice that steals into the frontal lobe of a heavily medicated individual, or the calculated thoughts of a man who knows that feeding the public what it thinks it wants, gets him what he knows he wants?
Posted by Kenyan Girl at 3:23 PM No comments: Links to this post

What do you get from an arranged marriage?

For the full effect, go to:

Trust me, it will be worth it. Below is a sample of the hilarious dialogue you will encounter.

Wife: "Well, you don't use the mouth either...maybe the man are supposed to use the mouth. If you wanted to get some, you'd give some as well."

Husband: "20% of the time you are on the periodical anyway"

There is a lot concealed underneath the sari and apparently some Indian men are getting tired of it.
Posted by Kenyan Girl at 11:53 AM No comments: Links to this post

Email ThisBlogThis!Share to TwitterShare to FacebookShare to Pinterest
Labels: On The Verge of WTF

So, I head off to Target to get some flameless candles for my show and I stumble upon a copy of the ESSENCE magazine; the issue with Kerry Washington on the cover, possibly showcasing the fake Afro Wig atop her head, with the words “Race: Being Black in America” by Soledad O’Brien leaping off her airbrushed left cheek.

I don't know about you but I could feel the stench of frustration riding across the bridge of my nose, while apathy weaseled its way up my belly knocking the edge of my epiglottis. Why would anyone put an article about being Black in America on Essence? Because it carters to Black readers, would be your respond. And to that I say, for that very reason it should NOT be in Essence.

I mean, have Black folks suddenly forgotten their experiences that they need a reminder? Or, is Soledad going to provide us with some new information? I seriously doubt that. See, having this article in Essense is like preaching to a choir that has been preached the HECK out! Why not print it in Elle where they have a fondness for de-coloring Black people? (See image below). Or print it in Vogue where black models can barely get a job. Teach them some racial empathy. 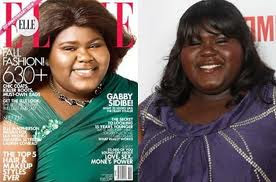 The problem with this country is that opposing sides are not talking to each other, let alone listening. Everyone is preaching to their respective choir giving no thought to the hungry man on the street, much like the churches do - (hmmm...there is something to that comparison). FOX news has a completely conservative audience who will never be caught browsing WFThasObamadonesofar.com. While Bill Maher and Jon Stewart are flanked by liberals and progressives who make a mockery of Rush Limbaugh and Glen Beck followers. The Left and Right see and hear only what confirms their own -ism. Progress will not come until both sides admit they HAVE been wrong.

And that will only be achieved by cross-pollinating information. The Left's ideas should be reviewed by the Right and vise versa. Simply put, if you don't know where your opponents stand on issues you can't have a dialogue, only an argument fraught with misinformation?
Posted by Kenyan Girl at 11:07 PM No comments: Links to this post

Email ThisBlogThis!Share to TwitterShare to FacebookShare to Pinterest
Labels: On The Verge of Capitalism
Newer Posts Older Posts Home
Subscribe to: Posts (Atom)