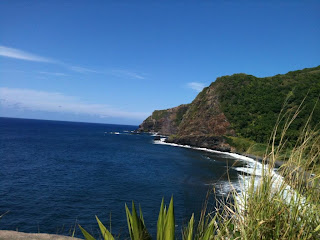 So this past month or so, my beloved and I took a trip to Paradise, aka MAUI. I have to say it is truly the most beautiful destination in the US. Did you know that there are NO snakes in Hawaii, just Coqui frogs singing at 80-90 decibels every night? Those who have migrated to Hawaii are petitioning the State to wipe the frogs out because these amphibians are not indigenous to the Island and therefore dangerous to the ecosystem. HAHAHAHA! Look at the pot calling the kettle black. 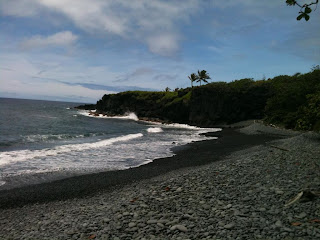 Speaking of black, Maui boasts one of the most beautiful features of any coastline, BLACK SAND BEACHES. Hawaii is also known for some RED sand beaches, but you know what they say..."once you go black everything else sucks!" Now, I will admit that unlike regular white or brown sand, the black sand situation is a tad more -- um rough, coarse nah too racist, conjures up images of violence, bad language and nappy hair --- a tad more prickly! 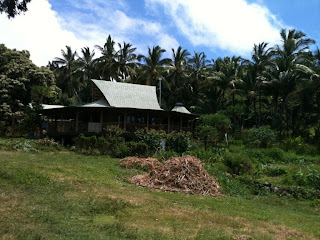 But I couldn't complain coz after every piercing moment on the sand, came a soft landing in this cute little love shack atop the hill, where we spent the nights listening to the geckos chatting amongst themselves and with us. Apparently geckos confirm a true human statement by making whatever sound it is they make. Not sure I believe that but the locals do and that is good enough for me. 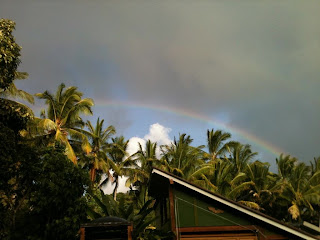 That and the fact that heaven would come down everyday and kiss the earth. It took everything in me not to give in to a life of spiritual wanderings in the jungles of Hawaii with a seldom cleaned booty. Being an African, all this sort of wilderness living spoke to me, it was calling me. And some times it was not easy to fight the urge, especially when I encountered stuff like this.

TRIPPIN' ON THE VINE 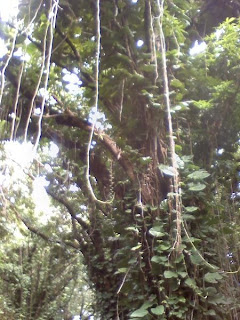 Now tell me you didn't wonder whether you could swing off it? Maybe you didn't, but I sure as hell did. The wild and untamed gene in me wanted recognition, satisfaction. It became cocky, turning to the non-Africans with a grand proclamation, "I bet you I can swing off this." They laughed and dismissed me. DISMISSED THE CHANCE TO WITNESS A PURELY WILD EXPERIENCE! This Africana diva was not going to be denied. 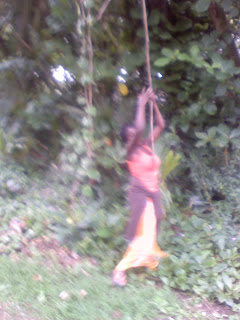 So let me be the first to say "Shia, you get my respect dude!" Swinging off these vines is not an easy fete...for real. There was a whole lot of blood, sweat and chaffing with no productive swinging motion to show for it. I cried like a baby. No adult should be allowed to endure such pain. Maybe I was top heavy, maybe this Africana is too westernized, I don't know. What I do know is that I did not have the core strength to pull it off, an admission that demoralized me. I had to redeem myself somehow.

But alas, it was time to return to Los Angeles. And after searching extensively for ways to redeem my lost African pride, all I could come up with was this wicked stunt! 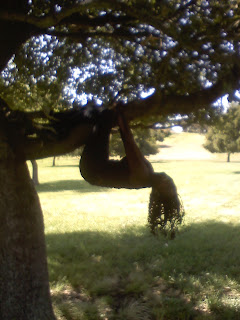 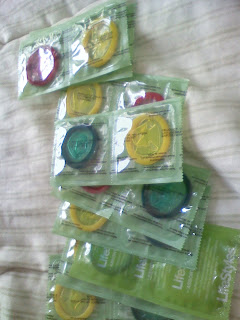 Are these condoms of lollipops?

It is dangerous when you can't tell the difference. This certainly makes a sexual predator's work a whole lot easier. Talk about two birds with one stone. Argh!


THE DANGERS OF SHORT SIGHTED MARKETING

Really, there is no need for lollipop-like condoms unless the expected sexual participants are under the age of 18. And if that is the case, one better call 911 or Child Services. They are NOT cute, if anything, they are very disturbing.
Posted by Kenyan Girl at 3:52 PM No comments: Links to this post

Email ThisBlogThis!Share to TwitterShare to FacebookShare to Pinterest
Labels: On The Verge of WTF
Newer Posts Older Posts Home
Subscribe to: Posts (Atom)